Cats are oddballs when it comes to their behavior, and whilst some of their weird habits like the crazy running from room to room or intensely staring at walls leave you wondering why they act like this and make you laugh, other peculiar ‘rituals’ seriously test your self-control and drive you crazy. One of these strange behaviors is obsessively pawing or scratching at mirrors.

Every cat owner has wondered why their kitty is staring at a mirror and has a curious or fearful reaction to their own reflection making them act suspicious or aggressive towards the mirror. Why do cats excessively paw and scratch at mirrors? What can you do to stop them from annoyingly waking you up in the middle of the night?

If you stick with me, you will find the answers to all of these questions, and how to possibly fix your problem. 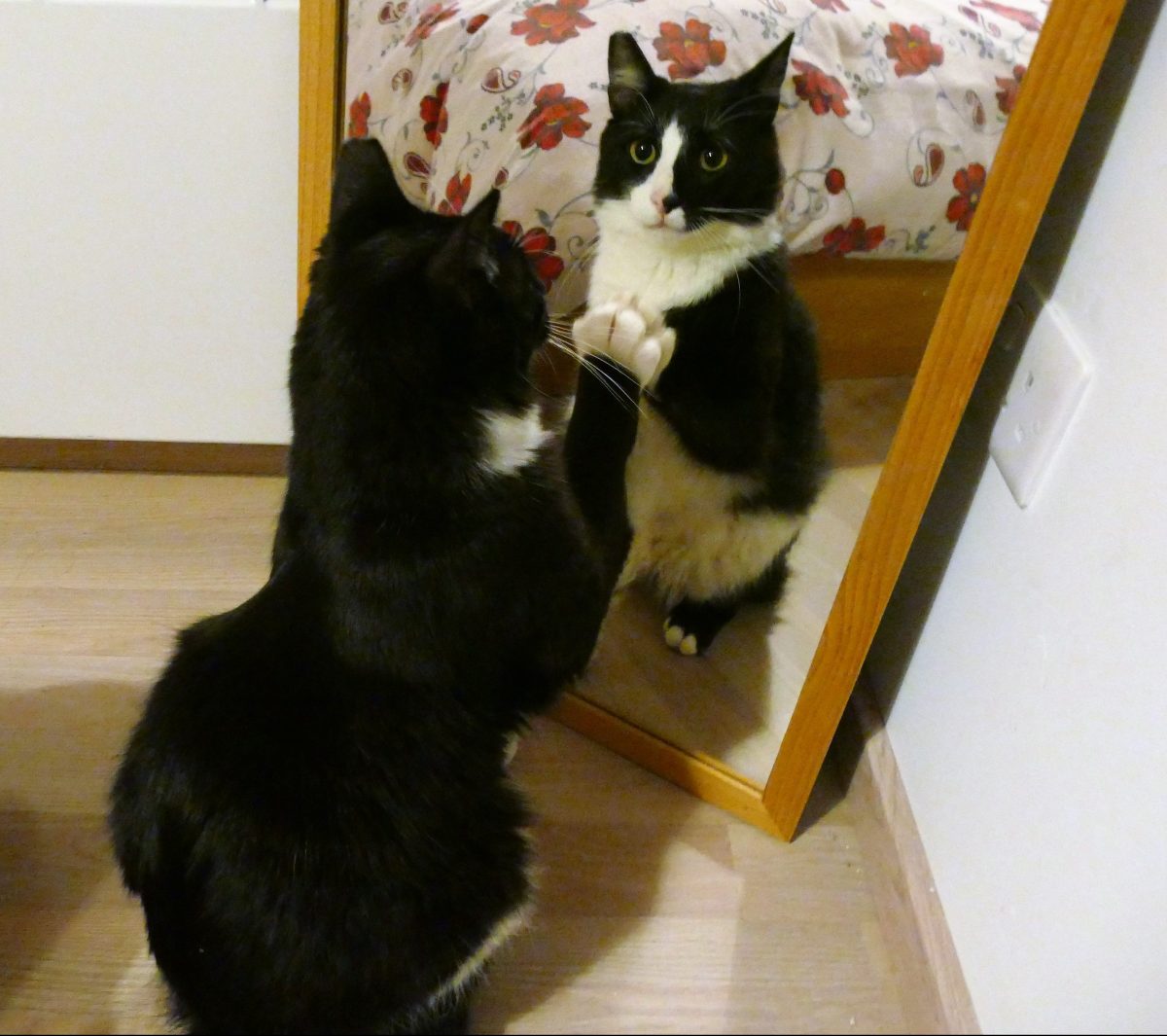 After moving in with Brian in our new small one-bedroom apartment, Dobby had a hard time adjusting to his new environment. He then developed strange behaviors like spending a big part of his awake time hiding under the bed and the most annoying was scratching the bedroom mirror and the front door, especially at night when we sleep.  He just wanted to get our attention, and probably is confusing the mirror with a window, because his only desire was to go out, being used to be also outdoors. It took a lot of patience in ignoring his scratches and special playtime before bed to give him and his sister Dot enough attention and activity indoors, and then offering them a big meal before we went to bed, to stop him waking us up in the middle of the night scratching. Owning a cat can definitely teach you patience!

Before I offer you some pointers on how you can stop your cat from scratching a mirror, you need to understand why they do it. Read on to find out!

No. Cats don’t understand mirrors, at least not as humans do, and their visual cognitive skills remain a mystery. If a feline is gazing in the mirror she is probably not admiring herself, but probably trying to figure out who is the odorless cat staring back at it and trying to get behind the mirror to look for the ‘other cat’. Most cats ignore their reflection whilst others will just act weird like puffing themselves up or walking on their tip-toes, but some cats will behave aggressively towards the ‘other cat’ that is perfectly mirroring her actions and adopts an attack posture perceiving its own reflection as a threat.

The cognitive abilities of cats rely mostly on their sense of smell. Cats identify other cats, places, and you as its owner, by smell, and not because they know how you look like. Cats even have an extra olfactory organ, called the Jacobson’s organ, that helps them enhance their sense of smell. That’s why it’s advised when your cat is missing to place outside of your house its litter box or some of your dirty clothes from the washing basket to aid the kitty in picking up the familiar smell and getting back home.

Cats are not self-aware and don’t recognize themselves in the mirror. A cat does see its reflection but perceives it as another cat. According to a study from 1970 based on Gordon Gallup Jr.’s behavioral technique attempting to determine self-awareness in animals, called the ‘mirror self-recognition (MSR) test’, or the ‘red spot technique’ cats are indeed scientifically proofed dumb-dumbs and cannot recognize their own reflection.

The mirror test by Gordon Gallup

With the mirror test developed by Gallup, researchers measured animal cognition and self-awareness by sedating it and marking it with an unscented red dot, or a sticker, on a body part that the animal cannot usually see without the use of a mirror (like their face, forehead or ears). If the animal woke from the anesthetic and discovered the mark upon looking in the mirror, touched the red dot on their faces, or investigated it, then the animal passed the test and can perceive the reflected image as its own appearance, therefore the animal possesses the ability of self-recognition.

Unfortunately, many animals did not pass this test, including cats and dogs. The only animals that did pass the MSR test were great apes (chimpanzees, gorillas, orangutans, bonobos, and humans), dolphins, orcas, the magpie birds, the cleaner wrasse fish, and one particular Asiatic elephant.

A big number of animals failing the test doesn’t come as a surprise as many of them don’t know how they look, and they rely on their smell and not their sight to identify things and places. Also, many animals don’t groom themselves and we can’t really determine their self-awareness by conducting the mirror test, because even if they saw their altered image with the red dot mark, they didn’t feel the need to clean it.

❗ Thats meow Mirror test challenge ❗
Try to experiment and test your cat’s ability of self-awareness with your own mirror test!
If your cat doesn’t have a negative reaction towards mirrors and they are accustomed to seeing their reflection, put a sticker or a red dot on your cat’s face/forehead when she is asleep, and then place your kitty in front of a mirror when awake. Let us know the result in the comments below or video their reaction and post it on social media with the hashtag #thatsmeowmirrortest!
Thanks for subscribing! You will not regret it!

Why do cats scratch on mirrors?

Cats scratch mirrors for one of the following reasons:

Curiosity at its finest

As I said before in other articles, cats are very curious animals, and one of their ways of learning what an object is and how does it work is by pawing at it or scratching it, just like you did as a baby trying to find out how something works by breaking it into pieces. If they see movement in the mirror they would probably want to check it out and paw at the mirror or stare at it for a while.

This behavior can happen to cats of any age, especially with cats that don’t receive enough attention or play stimulation indoors and who are left alone for a longer time. In the same way, cats that don’t like change can pick up this nasty habit and furiously pawing and scratching a mirror to get your attention. They normally know it’s bad behavior from your reaction to quickly stop them, but they do it anyway because they start to learn that when they do it something exciting might happen and they WILL get your attention.

Just as we established earlier, cats can see their reflections in a mirror but have no visual self-awareness and most probably perceive their reflection as another kitty. In this case, it means that your feline friend is confused by her own reflection and starts to feel threatened. This can be a way of marking a boundary on the mirror with the scent glands from its paws to keep the ‘stranger’ away. Most of the time, once your feline understands that the ‘other cat’ doesn’t pose any threat, and they can’t identify any smell coming from it, your kitty will become uninterested in the intruder from the mirror.

Your fluffbal can mistake a mirror for a window. This is another case of territorial defense and a cat might see its reflection as a stray cat trying to come inside the house and invade its space. Your kitty will probably try to show its authority to the trespasser by also meowing, hissing, or attacking the mirror, and will continue to do so until the behavior is corrected.

Even if for you this might sound like chalk on a blackboard, the sound of their claws and the feel of their paws on the smooth surface of a mirror or a window can soothe a stressed or anxious kitty. If your kitty doesn’t feel safe will scratch your mirror or windows to comfort itself. 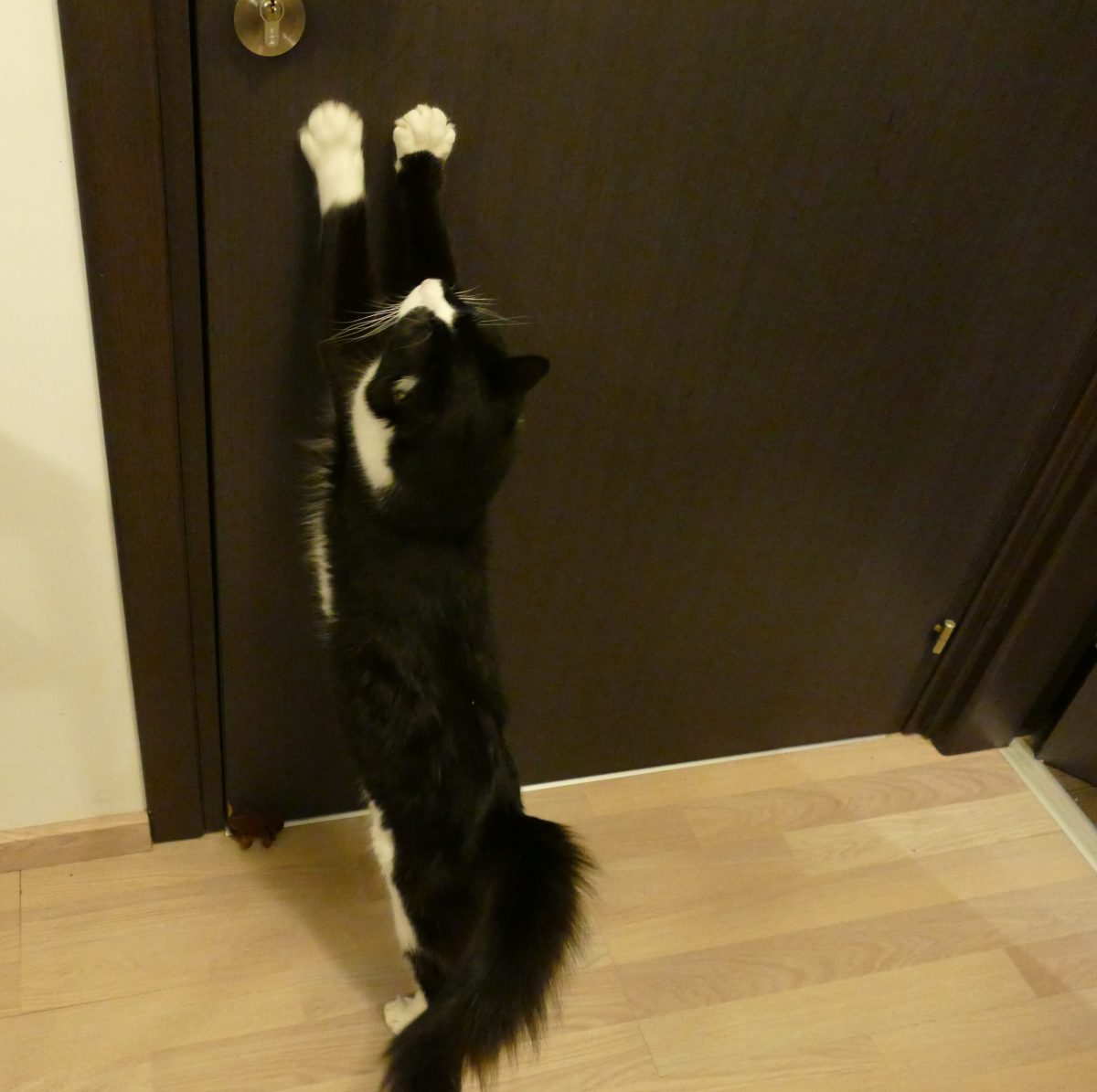 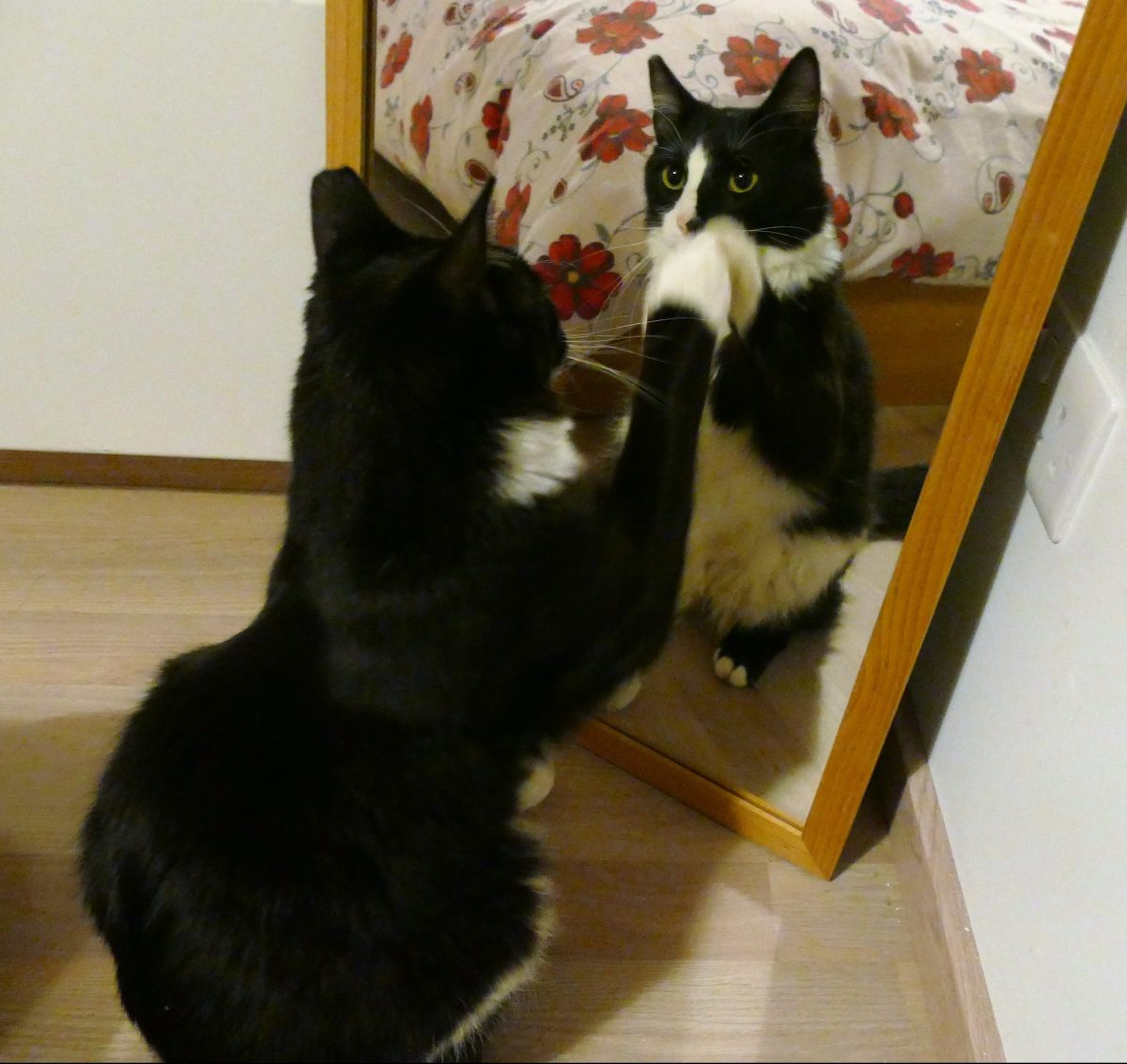 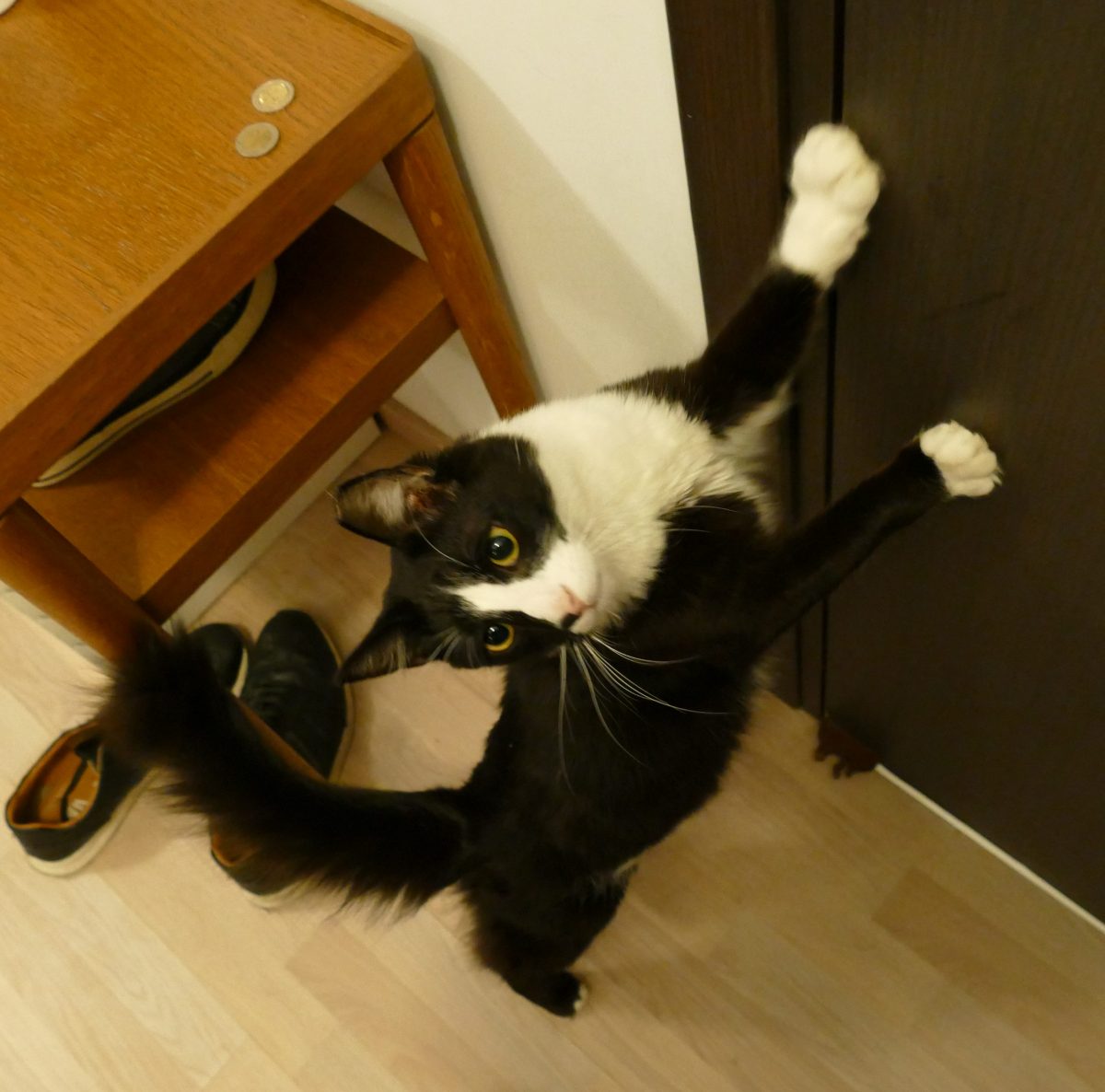 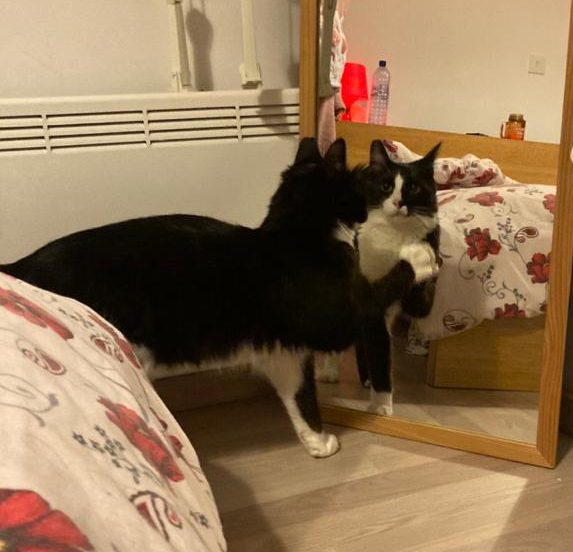 With Dobby, it was definitely an attention-seeking behavior, as he completely ignored ‘the other cat’ in the mirror, and also he knew that what he was doing was wrong because we initially started to call out to him when he was scratching and he would stop for about thirty seconds then do it again. Sometimes he was teasing us by deliberately pawing the mirror one more time whilst staring us in the eye to see our reaction when we looked at him. He was probably also mistaking the mirror for a window, and trying to get out through it. He was relentlessly trying to get outside from his first day in the new place, also scratching the entrance door, the bedroom wardrobe, and checking all the windows and ways to go out. After two weeks of keeping him indoors in the new apartment, we will slowly introduce him to the neighboring area. His GPS tracker is on its way!

How to stop a cat from scratching mirrors?

To stop a cat from scratching mirrors and help them get over a negative reaction to it you can try to:

Piece of advice
Before you jump to any conclusions, pay attention to your pet’s behavior and try to understand the exact reason why they started acting out and scratching the mirrors of your home. Is it a thing they normally do and you are just curious in finding out why or they just suddenly started scratching out of nowhere? Is your furbaby not used to change or has a hard time adjusting to a new environment? Did you recently move away to a new house? Did you replace any furniture? You might find completely new reasons for this behavior. Maybe your cat used to have a companion and now is alone and lonely and tries to play with the ‘other’ cat in the mirror, or you just adopted a new kitten that is seeing a mirror for the first time. Kittens also will try to play with their reflection or scratch your mirror because they use it as a scratching post.

If the mirror scratching persists, and you feel like you’ve tried everything to keep your cat happy but still didn’t manage to correct its irresistible urge to paw and scratch at mirrors, you should contact your veterinarian for medical tests and diagnostics as your cat might require an animal behaviorist or even anti-stress medication.

Let us know in the comments below why you think your cat is behaving like it is, or even better, tell us what did you do to stop them from scratching shiny objects or windows!

Finding a lost cat - all the useful tips [ 7 step guide]

Added to wishlistRemoved from wishlist 1

Best budget cat food that is healthy and affordable 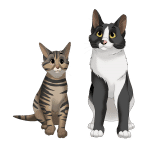